Watching Finding Nemo for the one billionth time starts to bring up some questions. First and foremost is the question of HOW IS IT POSSIBLE for a TINY FISH to out swim a shark?

It got me thinking about what are the world’s fastest marine animals?  Also, what makes them fast? What I found out is about to BLOW YOUR MIND. 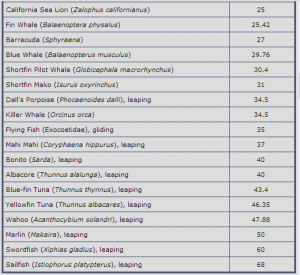 First of all, there is a list of top speeds for swimming animals and it is DOMINATED by fish. I thought that whales, sharks, dolphins and turtles would be on it. It is not until spot 11 that a whale finally makes it onto the list.
Dolphins and sharks quickly follow and turtles are nowhere close to noteworthy speeds. How is the possible? I have eaten quite a few fish from this list and now I know that I would not have caught them in the wild.

There is almost near consensus that the fastest swimming animal is the sailfish. SAILFISH? I have never even heard of this fish, but apparently it gets up to 68 miles per hour.  This fish could survive on the freeway.
The Sailfish has a few features that make it a great swimmer. It has the long thin jaw bone that juts out. This feature creates low resistance flow and makes the fish more hydrodynamic.
It also has two sets of muscles in its body, white muscles for the initial sprints and red muscle for the long haul. If you are wondering whether its dorsal fin-or SAIL-was developed for speed, scientists don’t know. We will just have to wait until they study it more. 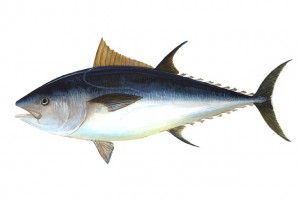 Another fish on the list worthy of highlight is the Tuna. Both the Yellowfin Tuna and the Bluefin Tuna are clocking in at over 45 miles per hour.
The secret to how the tuna gets so fast has a lot to do with how the tuna body is designed to maintain its warmth. The veins and arteritis in the Tuna were designed in a way that allows an exchange that reduces surface cooling. This leaves heat in the rest of the body that allows the tuna to maintain a higher swimming speed. We should stop calling it the chicken of the sea and it should now be known as the raptor of the sea. 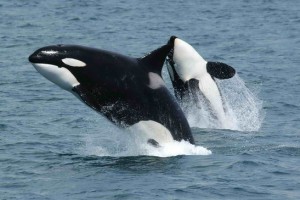 Our first non-fish appears at slot 11- the Killer Whale. It’s clocking speeds up to 34 miles per hour. This is HALF the speed of our top winner the sail fish. This high speed is definitely for the hunt and short bouts and not for the long run.
Part of what makes the killer whale so fast is all the blubber! It gives the whale fusiform shape which then reduces the overall drag that the whale experiences in the water.
Whales are also intelligent enough that they have discovered some non-physiological ways to go faster. First, they follow in the boat streams because they can get twice as far on the same amount of energy when they use the waves for swimming.
Second, the younger whales always swim along the mother in an area known as the ‘slip stream’, which makes the younger whale able to use the hydrodynamics of the mother’s motion to its benefit. Killer whales may not be the fastest on our list but they are definitely using their smarts to increase their speed.

Our fierce friend the shortfin mako shark comes in at lucky number 13. Certain mako sharks have been tracked at faster speeds but average estimates are around 31 miles per hour. I am not sure Dori could have swam away from this bad guy.
Sharks speed has some of the most extensive research. One of the most interesting findings is that shark can manipulate their outer layer to create less drag when they are trying to swim fast.
Sharks are not covered in scales but rather ‘dermal denticles’ which is similar in texture to our teeth. These denticles raise up and create little wells all over the body. Think of all the wells on a golf ball! This leads to less drag for our friend the mako shark as he lunges after his victim. 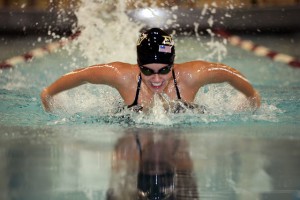 So where do humans fall? Well our fastest swimmers can clock in around a pitiful 5 miles per hour. Maybe that is why our fastest stroke is called the crawl?
The moral of this story is that you don’t want to get in a race with any of these marine animals because they are going to soundly beat you. All of them have special design features that we humans don’t have which can allow them to reach the top speeds in the water.
I have tried to picture the perfect swimsuit based on these helpful tips and I have decided that it would include a piece that juts out from our face. It would also cover almost our whole body to keep us warm, be made of blubber like material and have dimples all over the suit. Someone should send that design to Speedo. 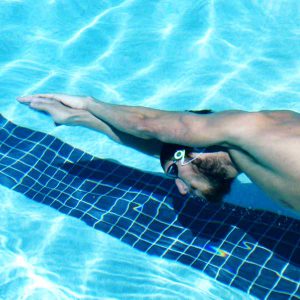 Of course, there already exists one great tool to help me swim faster.  Thank goodness for my waterproof iPod from Underwater Audio!  Talk about being pumped up for a speedy swim.

How fast can you swim?
Do you stand a chance against marine life?
I would love to hear some racing stories and what gave you the extra speed that you needed.