What Customers Are Saying about Underwater Audio:

A lifelong resident of Pittsburgh, Pennsylvania, Mike L has been making strides in changing his life since the passing of his mother. Shortly after his mother’s death, Mike joined a fitness club in August 2011. He began taking weight loss seriously in November 2011. Underwater Audio’s iPod shuffle product has been there to help Mike in his journey.
“I stumbled across your website and was very fortunate,” he said. “Music inspires me to swim longer and there is no better exercise in my opinion!”
In the seven months since purchasing an iPod shuffle from Underwater Audio, Mike has subsequently lost 65 pounds and he isn’t done yet. “My goal is 30 more lbs. I know I can do it, I’ve come a long way,” he said. Mike is a fairly new swimmer, but he enjoys the sound quality the Underwater Audio iPod shuffle offers. Although Mike has just recently started swimming he heads to his local gym six days a week and twice a day when he is off work. Mike even got attention when he took his iPod shuffle to a different gym. “I took it with me to Virginia, to see my sister, and people at her gym were asking me about it,” he said.
Mike has worked as a Rite Aid Drug Store Manager for the past 18 years. He has also been involved with the Children’s Miracle Network for 15 years and participated in walking for diabetes and walking to support lung cancer. Other than swimming, Mike enjoys thrill rides in his free time especially the Raptor at Cedar Point in Ohio. Mike prefers playlists full of upbeat, fast music, such as Green Day, Eric Saade or Lady Gaga when he swims.
In addition, Mike offered words of advice for people looking into purchasing an Underwater Audio iPod shuffle. “Go for it. You will not be disappointed.” Check out the Underwater Audio bundles. 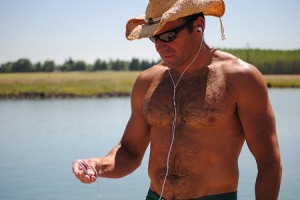 When other tri-athletes seem to dread the strenuous, long swims, David Johns thrives with his waterproof iPod shuffle from Underwater Audio. “Swimming is my favorite part of triathlon, but I think least favorite to other tri-athletes because of the difficulty in being an efficient swimmer,” he said. “It’s a lifelong pursuit.” A retired 20-year U.S. Navy veteran, Johns currently resides in Barre, Vermont and swims 5-10 miles a week in a pool or open water in training for triathlons.
“I could not do the long swims without music and the waterproof iPod is mandatory equipment,” he said. “I also use them for running and biking since they are waterproof. I have been through several MP3 players and the waterproof iPod has been the best product hands down. Johns’ long workout routine is thoroughly helped by having the waterproof iPod shuffle. “My normal routine is 2000 yards on a slow day and 4400 on training workups,” he said. “Having music to listen to keeps the motivation up and I’m not in a rush to get the workouts over.
Johns began looking into purchasing a waterproof iPod for an added energy boost due to the long hours he spends in the pool. Johns purchased multiple Underwater Audio waterproof iPod shuffles nearly three years ago and has had positive experiences. “There are many companies that make waterproof MP3 players and I have been through most and wasted a lot of money on inferior products,” he said. “Apple’s quality can’t be beat and when you make it waterproof, it’s unbeatable. Money well spent.”
“It’s small, easy-to-use, and reliable and has many uses.” Johns, who is married with two children has begun a second career in the financial services industry. His favorite song in the water “I can’t slow down” certainly gives him an advantage over other tri-athletes without the energizing feeling of music.
Find your advantage with Underwater Audio!