Phil the groundhog predicted an extra long winter for this year.
Everyone around seems to be feeling the gloomy effects of these winter storms. 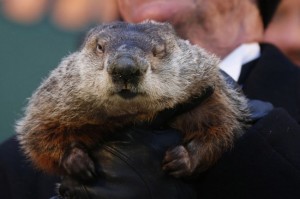 What can help motivate me to get up an hour earlier to fit in a workout? Hopefully these stories of successful swimmers will give you the inspiration you need to overcome any obstacles.

Shortly after her graduation from college in 2001, Karen Gaffney participated in the relay swim across the English Channel. In 2007 she tackled a 9 mile swim across Lake Tahoe.
She has also completed over 16 swims across the San Francisco Bay including triathlons. She is an AMAZING swimmer who happens to have Down’s Syndrome.
Gaffney participated in the Special Olympics and took away two gold medals. However, her life is more than being just an inspiring swimmer. She has been a huge advocate for Down’s Syndrome awareness and promoting a positive image for what Down’s Syndrome people can accomplish.
She was awarded an Honorary Doctorate’s Degree from Portland University in May 2013 and has started the Karen Gaffney Foundation which is dedicated to full inclusion of Down’s Syndrome and other disabilities. Not bad for someone who is not even 40.

At the age of 14 Natalie began her international swimming career. She was fast, really fast.
Three years later, Natalie encountered something that could have ended her swimming career forever. She was in a horrible car accident and her left leg had to be amputated at the knee.
However, du Toit was not about to let her swimming dreams go down the drain.
Just a year after her accident, Natalie set some world records at the Commonwealth Games. In 2004 she won 5 Paralympic medals.
Even more amazingly, du Toit refuses to let her accident define her. For the Beijing 2008 Olympics, Natalie du Toit became the first disabled swimmer to qualify for the able-bodied Olympics. South Africa picked Natalie to carry the Olympic Torch before the games.
She has since then been recognized not just as the best of athletes with disabilities, but as one of the best athletes to come from South Africa.

Just 25 years old, Daniel Dias has become one of the most interesting swimmers to watch. He has been swimming since age 16.
He competed in both the London and Beijing Paralympic swimming events. He took away 15 medals in those Paralympics making him the most decorated Paralympic athlete. His athletic capabilities have won him the prestigious Laureus World Sportsperson of the Year.
TWICE!
His 50 m freestyle time is down to 32.05. He is also the native favorite for the upcoming Rio Olympic Games in 2016 so keep your eyes peeled for him in the water.
So what has Dias been doing in his break from winning Paralympic medals? Well he is only going to Universidade São Francisco for a dual degree in Mechanical Engineering and Physical Education.
Dias was born with malformed limbs, leaving him without hands and his right leg stops at the knee.
This has not slowed him down. His swim times, his educational degrees, and his wonderful personality make him a person for anyone to aspire to be.

Get Back to Your Goals

Have these people made you feel like maybe you could be doing a bit more with your life?
That’s the point!
Get back to the pool!
If Dias has time to go to school and win golds, so can you. If Gaffney can make it across Lake Tahoe, there is no need to fear about your upcoming triathlon. If du Toit can leave a car accident and become an even better swimmer, you can ditch your unhealthy food habits and improve your diet. Let’s do this!
Who inspires you?
Leave awesome and inspiring stories below!