Ever heard of an underwater lake or river?
No, not underground in a cave or something.
We’re talking a river flowing through the ocean floor. A body of water within a body of water (*Inception*)

In the Yucatan Peninsula of Mexico, an entire river environment flows on beneath the waves.

Named Cenote Angelita, Anatoly Beloshchin brought this phenomenon to light with his photographs (featured in this blog). His thoughts as he dove were “We are 30 meters deep, fresh water, then 60 meters deep – salty water and under me I see a river, island and fallen leaves…”
While the river appears eerily out-of-this-world, science has produced an answer.

How It Works
The effect is produced from the combining of fresh water with extremely saline water. A cenote is a water-filled sinkhole commonly found in Mexico. In the case of Cenote Angelita, fresh rainwater fills it from the top while salty ocean water filters into the bottom.

Because there is such an extreme change from pure to salty water in a relatively short distance, a cloudy layer forms between them.
This then flows and twists around, just like a river. Cenote Angelita isn’t the only underwater river either; scientists have discovered one in the Black Sea and one off the coast of Australia. 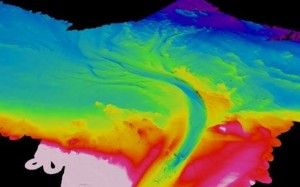 (Thermal image of the river within the Black Sea)

No matter how it’s made, the effect is breath taking. If you are an experienced diver, don’t miss a chance to go diving here! If underwater rivers exist, why not lakes?

http://www.youtube.com/watch?v=KzUEr7uMnXU
In 1990 just that thing was discovered in the Gulf of Mexico. Here, soupy brine water gently laps shores made of mussels. The result looks just like a lake above water, except for the eels swimming by.
Once again, science holds the answer.

The Answer
Similar to the rivers, the lakes are made of water with a much higher salt content than the surrounding water. While the ocean is salty, these lakes’ salt content is often three to five times higher.
The salt comes from ancient salt deposits being dissolved and the resulting brine feeding through a rift in the ocean floor. The lake also releases high concentrations of methane, which a special bacteria traps for the mussels to survive on.

Your Thoughts
So, what do you think? Have you ever visited one of these before?
If not, do you plan on it? Let us know in the comments!