The Best Audio Books for Swimming

This article has been updated! Its original publish date was June 19, 2013. 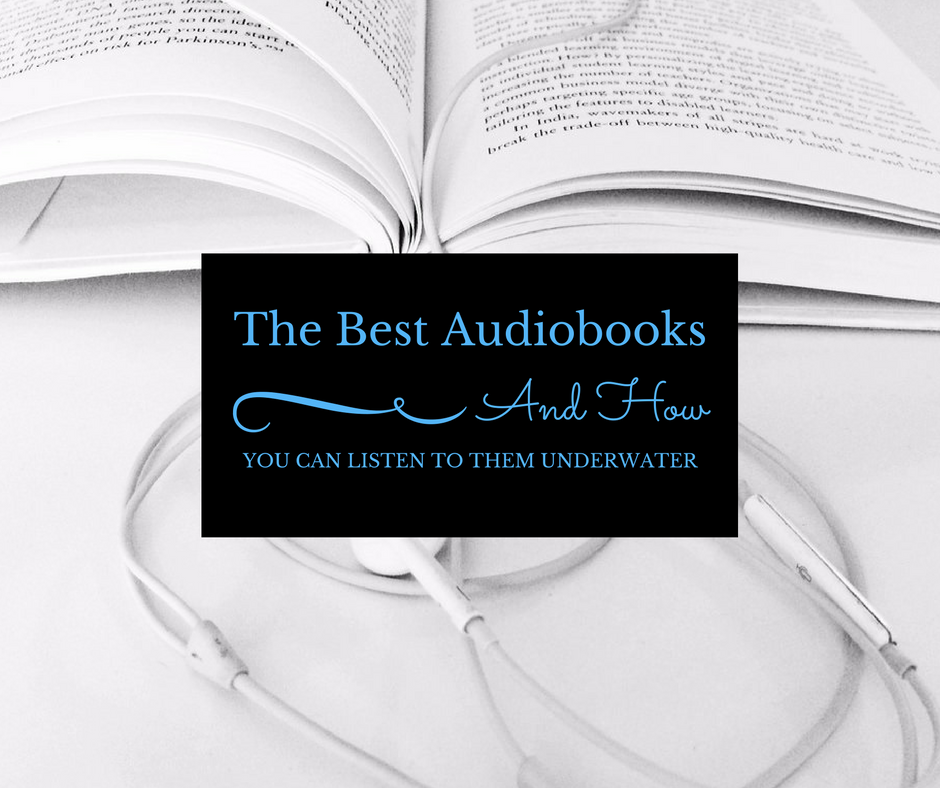 On February 22, 1952, Welsh poet Dylan Thomas was performing some of his work at 92nd Street Y in New York City, as part of a 46-location tour in the United States. At the time, he was struggling with alcoholism, experiencing financial difficulty, and beginning to suffer from bouts of illness; as history now tells us, the thirty-seven year old Thomas would only have a little more than eighteen months left to live. At that performance, he found that a note was left for him by two strangers, who had been turned away by the usher. The two strangers, having only signed the note with first initials and last names, wanted Thomas to meet with them at a studio, and to have him vocally perform his most popular poems as they recorded the audio on a 33 ⅓ RPM limited play.
They offered him $500. He missed a few appointments, but eventually, he made it. m 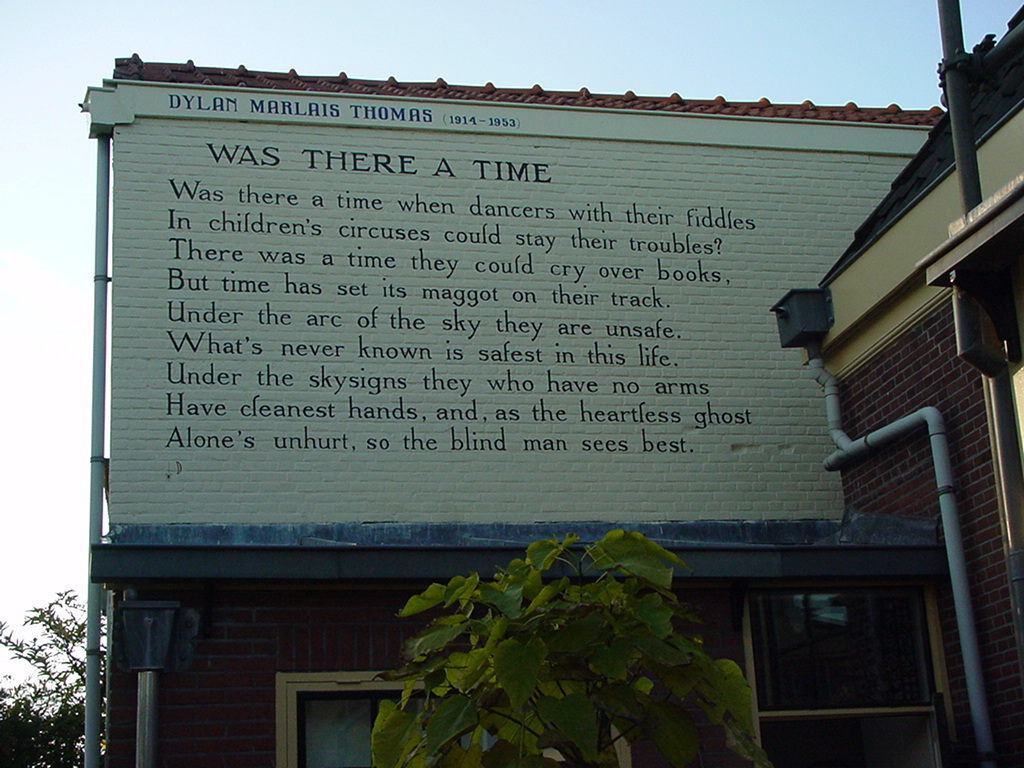 Those two strangers were the young Barbara Cohen (later Holdridge) and Marianne Roney. Both twenty-two years old and fresh out of college, they had decided to get into the record business, and were looking for the first potential content they could release on their new label. They had been rejected by the usher upon their business request, supposedly because they were female. As a result, they left the note with their first names concealed. The label that began with this Dylan Thomas recording, which included his now-famous reading of “A Child’s Christmas in Wales”, was called Caedmon Records, and it was the label that would spearhead an industry now worth more than two billion dollars: the industry of the audiobook.
Audiobooks have seen a lot since then. Innovations in hardware and storage technology have now allowed us to transcend the original medium of vinyl records (save, of course, for more nostalgic purposes). The advent of the cassette tape, the CD, flash memory, and non-local cloud storage have each extended our capabilities and expectations of how large but yet portable an audio library can really be. With the iPod shuffle that Underwater Audio’s released, you can literally take your books into the water, or the gym, or on a run, or anywhere else – and it’ll take much less space and weight than a record player and a stack of Caedmon vinyls.

THE IPOD SHUFFLE’S CAPACITY FOR AUDIOBOOKS

An iPod shuffle from Underwater Audio has 2 GB of space, which means that you’ll have space for multiple books in most cases, but listening to an audiobook while swimming should still be premeditated, because you won’t have the space to include too many audiobooks of novel size if you want to have music on your player, too. Per reference from www.solveyourtech.com, an example of common audiobook size is the Hobbit, by J.R.R. Tolkien, which clocks in at 156 megabytes of data when downloaded from a service such as Audible. This uses about 8% of the space on your iPod shuffle.

PUTTING AUDIOBOOKS ON AN iPOD SHUFFLE: A HOW-TO

The first thing you should know is that if the audiobook that you have downloaded is contained in a single file (which is the case for audiobooks bought from Audible or iTunes Store), the iPod shuffle will be unable to navigate from chapter to chapter within the file. As an alternative, when you listen to an audiobook on your iPod, the software will create an internal “bookmark” in your audiobook whenever you press the Pause button, and it will remember where you left off. You will then be able to skip forward to other books or songs on your iPod, and then when you want to resume the book you were listening to, just skip back to the book and hit Play, and the book will continue right from the point where you paused it. This is called “round tripping”. This bookmark will even transfer to the copy of the audiobook on your desktop iTunes whenever you sync your iPod, so you can plug in your iPod when you get home and then use your desktop iTunes to continue listening from right where you left off. iTunes will also create a bookmark when you pause an audiobook on your computer, and when you plug your iPod back in, the bookmark that is furthest along in the book will be the one that is synced to both devices.

If you are having difficulty in navigating from book to book on your iPod, using VoiceOver may prove helpful. (If you need to know how to enable VoiceOver on your iPod, here is Apple’s support page.) Hold the VoiceOver button on the top of your iPod shuffle (the small metal button next to the shuffle/on/off switch) until the voice in your headphones begins to read the playlist menu to you. You will hear the name of the playlist you’re currently listening to, followed by the “All Songs” playlist, and then the names of your other music playlists in alphabetical order, followed by Genius mixes, podcasts, iTunes U lectures, and then audiobooks, each organized alphabetically. When your VoiceOver reaches the audiobook that you want to listen to, you can either press the VoiceOver button again or you can press the Play/Pause button to begin listening to that audiobook.

IMPORTING AN AUDIOBOOK FROM A CD

The above instructions should help when you are listening to audiobooks that you’ve purchased online and directly downloaded from the store or the publisher, but if you’re like me, you also have several books on CD on various shelves throughout the house that would be nice to have on an iPod, too. Importing these CDs into your desktop iTunes and then moving them into your iPod shuffle is a simple process, which Apple explains on their website (click here for instructions for Windows, and click here for instructions for Mac).
Once you’ve imported those tracks from a CD, though, there are some specific things you have to do. Our guide on organizing audiobooks that was mentioned earlier proves handy here. Here is what it says: 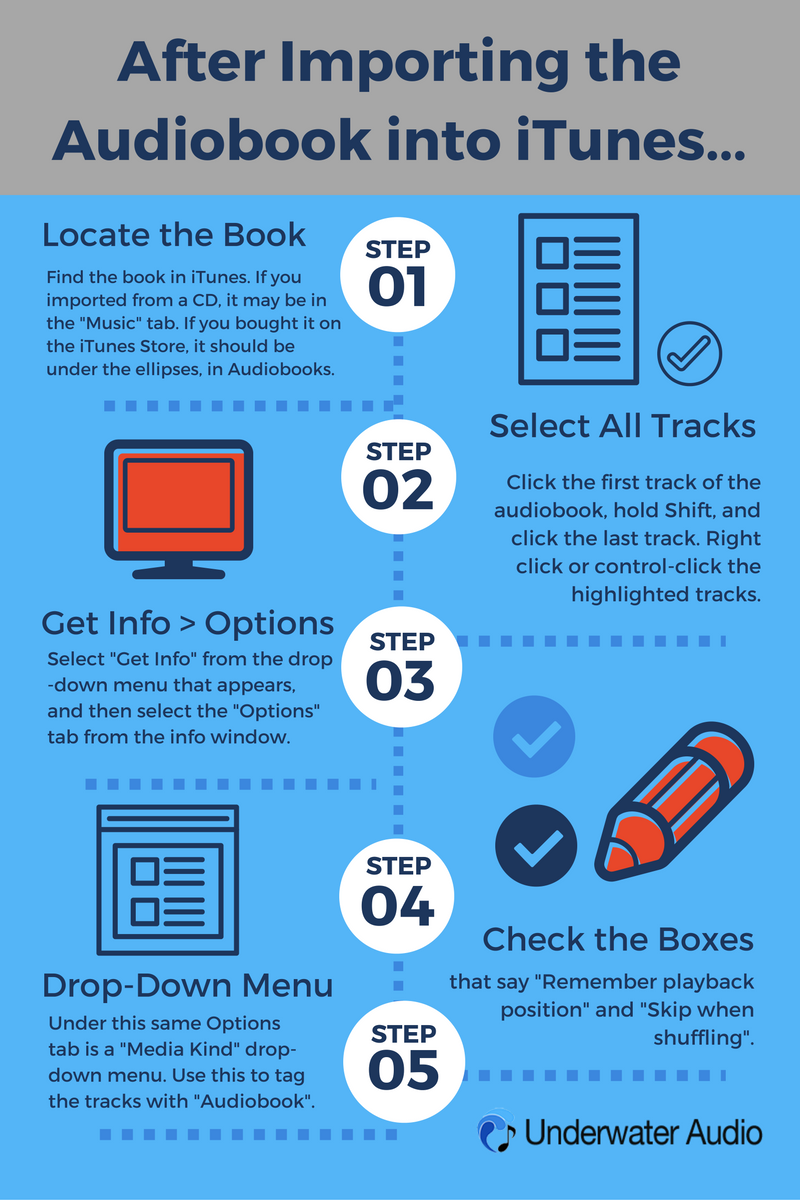 Some more recently released audiobook CDs may have information about the title, author, and chapter number for each track. With older CDs, however, the tracks may not have names, artist information, or anything else associated with them; they will appear as just a plain list of track numbers, with no listed authors or titles. In order to fix this, follow steps 1 and 2, and then enter the name of the author and the name of the book in the appropriate blank spaces. You can also edit individual track names in the same way, but only when you’ve selected a single track, and not multiple tracks.

WHAT ARE The Best Audiobooks TO SWIM TO?

Now that you’ve been acquainted with both the history and the mechanics of the digital audiobook, there is only one thing left to do.
What book should you pick?

Many would see listening to a book while working out as a classic form of multi-tasking. Until the audiobook came around, one would presume that reading and exercising always took up completely separate parts of the day. In that spirit, it may be tempting to use this newfound time to catch up on lectures or notes from work. However, I would suggest against that, at least at the start. Coming to associate your exercise with business or educational materials can add some drag to your motivation; if you get bored or tired enough of what you’re listening to, working out will become a total chore, and you don’t want that! If you don’t care about what you’re listening to, the benefits will be lost. Start out with a book that you’ve been meaning to read, or that a friend has recommended. Generally, the more of a narrative it has, the easier it will be to follow.

Fiction is always great. Mysteries are engaging audiobooks because they can keep you guessing right up till the end while you try to figure it out for yourself first. Similar genres are good because they’re usually written with a pace fast enough for you to go from one event to the next with little down time. This means there’s never a “good” stopping place. If you’re looking for suspense, contemporary authors like Michael Crichton and Stephen King have an impressive track record for crafting leading thrillers. If you’re wanting more of a look into the science fiction world, modern writers like Arthur C. Clarke and Jack Vance have written dozens of critically acclaimed books with storylines that will make your mind soar.

Fiction isn’t your only option for great storytelling, though; some of the most gripping adult books of the past decade have been nonfiction bestsellers like The Big Short by Michael Lewis, Red Notice by Bill Browder, and Enrique’s Journey by Sonia Nazario.
One of the best motivating tools you can use is to have books that you only listen to while exercising. Since one of the greatest benefits of listening to books while exercising is that you can’t finish it in one workout, this means- logically-that you have to continue listening at a later time (during your next workout!).

Once you’ve gotten into the swing of swimming to an audiobook, and you feel comfortable with the rhythm of someone speaking as you swim, you can then feel free to experiment with other kinds of books or lectures. Try finding inspirational books, about people accomplishing what you are trying to do, like Born To Run by Christopher McDougall or You Are an Ironman by Jacques Steinberg. This will help boost the motivation to keep you going and working toward your goal, because you will know it IS possible. Books by coaches and trainers are also something worth trying: Relentless by Tim S. Grover, and companion books The Champion’s Mind and The Champion’s Comeback by Jim Afremow, Ph.D. are some examples that are popular among online reviewers.

DON’T GET TOO DISTRACTED

Now, while you do want the books to keep you from thinking about how many laps you have left, you don’t want it to interfere with your actual swimming. This means you should avoid books with overly complex plots or materials. Also be sure to consistently gauge the attention span that you feel that you’re going to have for the day’s workout, and take that into account. If you feel like you’re not really mentally up to processing everything being said to you in an audiobook while working out, that’s fine; just make sure it’s not a book that you’ll regret missing part of when you zone out. I wouldn’t suggest trying your advanced math homework, for example. You don’t want to start floundering in the deep end because you had to mentally pause and figure a problem out.
This might be the perfect opportunity to find those oldies-but-goodies you
love and re-listen to them. That way you know you like them, but you know the plot well enough not to have to catch every word. You might not want to listen to George R. R. Martin’s A Song of Ice and Fire series for the first time, but if it’s your 5th time, go for it. (Which would be impressive to the point of being worrisome.) Or if you just haven’t been able to find the time to sit down and re-read all of the Harry Potter series, maybe exercise time will work.

So if you’re looking for something different to listen to, there’s a whole world of audiobooks that you can look into. Have fun; just find what you like and get swimming! (Though you might want to avoid Jaws…)